I have been an Apple Watch user for most of my time running. I originally purchased a watch to be able to run without my phone, and used my Apple Watch 2 for training and running for my first 3 marathons. After 4 years, the battery life on my watch was getting bad, and the software was buggy for the running app Strava. I decided it was time to upgrade to the Apple Watch 5.

After I start working with a running coach, I decided I still wasn’t happy with my new watch, and ended up getting ANOTHER watch just for running. I purchased a Garmin Fenix 6 pro, which is at the higher end of their watches, but had a lot of the features I was looking for. In retrospect, I should have just kept my old Apple Watch and gone with the Garmin. 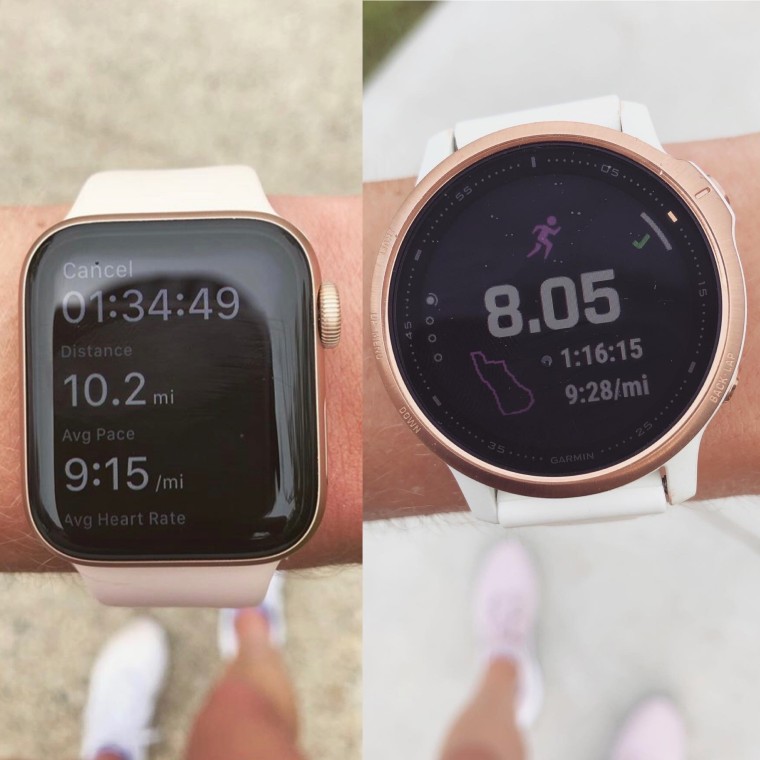 I’ve had quite a few people ask about the differences, so I thought I would share the pros and cons of each. Right now, I use my Garmin for running and my Apple Watch 5 for every day use. Here are my thoughts on the two:

My favorite part of my Garmin is the ability to load custom workouts from your phone. You can set up a warm up, repeat running and rest intervals, and a cool down, with durations based on distance, time, or heart rate. You can also easily record intervals with the lap button on the watch. On the Apple Watch, the running apps only allow for a start/pause feature, which is sometimes hard to navigate with a sweaty finger! Garmin will also collect the run and rest data, instead of just moving time and elapsed time on the Apple Watch.

For example, if I am running 1 minute repeats with 1 minute rest, I can send this workout to my watch, which will then alert me of when to run and rest. On the Apple Watch, I would have to watch the time and manually pause the run (or just stop and let it keep running), and then watch the clock for when to start again. Afterward, the data from the Garmin would show your pace for each interval, where the Apple watch would show average pace for each mile you ran.

If you use your Apple Watch all day with workouts, it will need to be charged every night. For long runs of over 3 hours and marathons, I would have to turn off the heart rate monitor so the watch wouldn’t die. For a causal runner, this isn’t the biggest deal in the world, but it can be annoying. My Garmin battery lasts multiple days– even up to a week depending on how much I use it (again I only have it on when I am running).

A lot of people say that Garmin has more accurate GPS data than the Apple Watch. I haven’t seen a huge difference in distances/paces, and I run the same routes pretty consistently. I have noticed a huge difference in the heart rate data. On the Apple Watch, a lot of my heart rate data would just be a flat line, or jump from extremes like really low one minute and then really high the next. The Garmin data is more consistent and smooth across the course of a run (which seems more accurate with how I feel during a run). Here is a comparison of the heart rate data of two very similar runs: 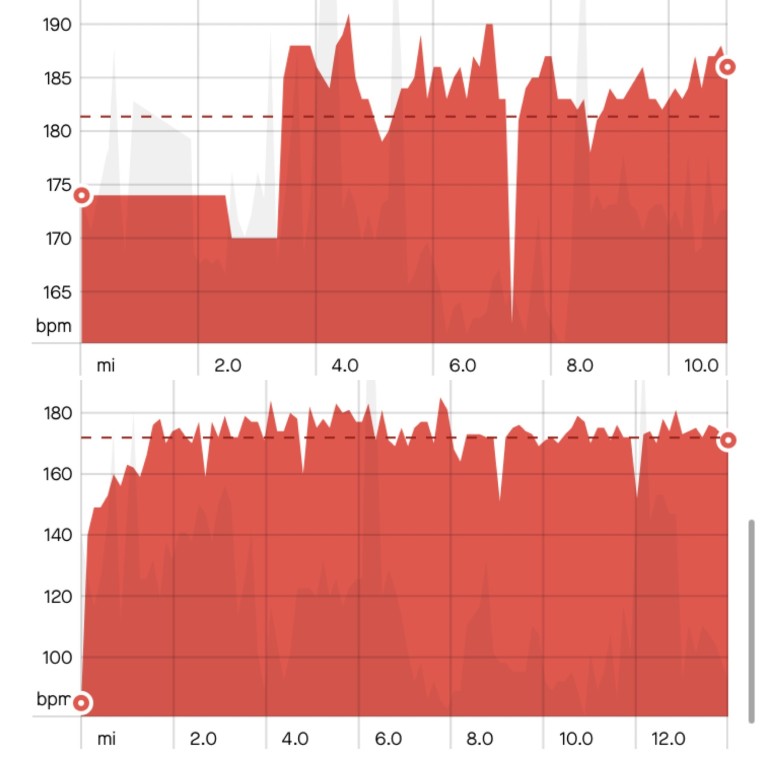 The Garmin also collects a lot more data related to fitness during runs, including weather, cadence, heat acclimation, and training load. The Apple Watch has a lot of health features, and you can get a lot of run data from apps like Strava, but I’ve found Garmin collects and analyzes more data from my runs.

When I first got my Garmin, I was shocked at how basic the screen was. The Garmin screen is mostly black and white text display, that is controlled by buttons on the side of the watch. Maybe I’m just used to the super nice display on the Apple Watch! I also feel like the Apple Watch is more straight forward to use since its a touchscreen. Now that I’ve gotten more used to the Garmin, its not a big deal, but half the time I still push the wrong buttons when I am trying to navigate! I assume the simplicity of the Garmin helps support its long battery life.

I also feel like the Apple Watch is more intuitive to use and understand. I think there are a ton of features that I’m not even using on my Garmin because its hard to just “play around” with. You have to know what you are doing to be able to use it.

Personally, I would not wear the Garmin as an everyday watch. No judgement to people that do– I just don’t like the look of it and feel like its a little clunky. I wear my Apple Watch the rest of the time, even during other workouts because its lighter. I like being able to control my phone, headphones, and respond to texts via the watch. I also prefer how the silicone Apple Watch band fits my wrist over the Garmin’s more traditional watch band.

The Garmin Fenix 6 has a sapphire glass screen that is supposed to be scratch proof. I never have had issues with scratching on my Apple Watches, and I have dropped, bumped, and hit the screen hard many times.

Obviously both are a major investment! I still think the Apple Watch is worth it for every day use. I wish the Garmin wasn’t quite so pricey, but I really appreciate it as my running watch. If you are deciding between the two, I would consider if the extra features and workout data from Garmin are really worth it to you, or if you are just looking for more of a general watch that can also track workouts. The Apple Watch does a really good job of it– but the Garmin is specifically made for this. 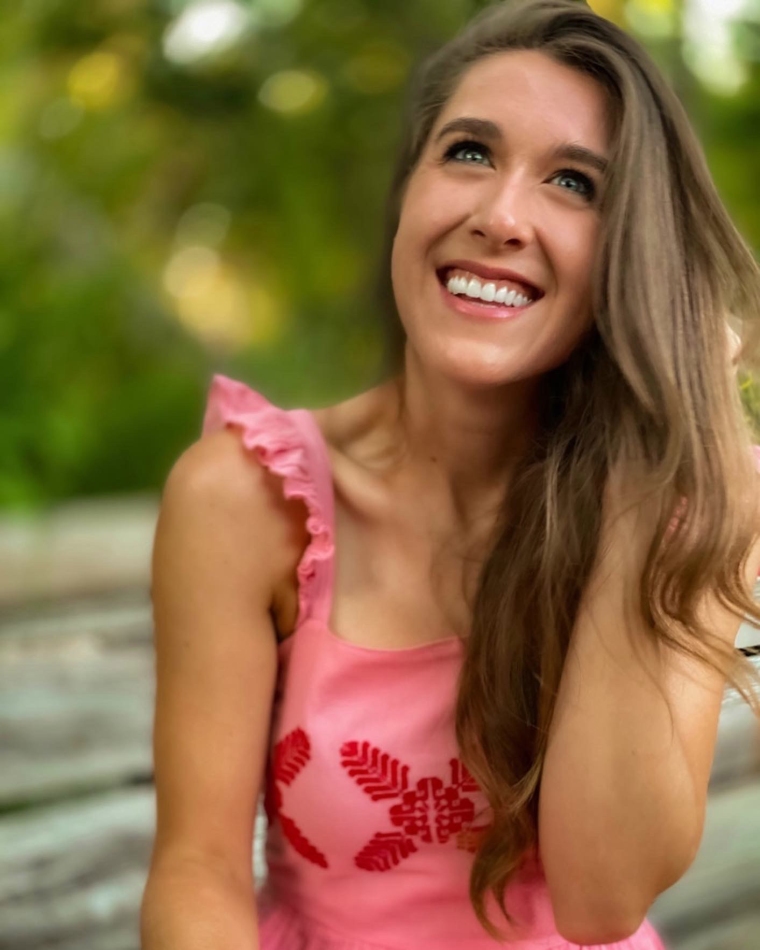